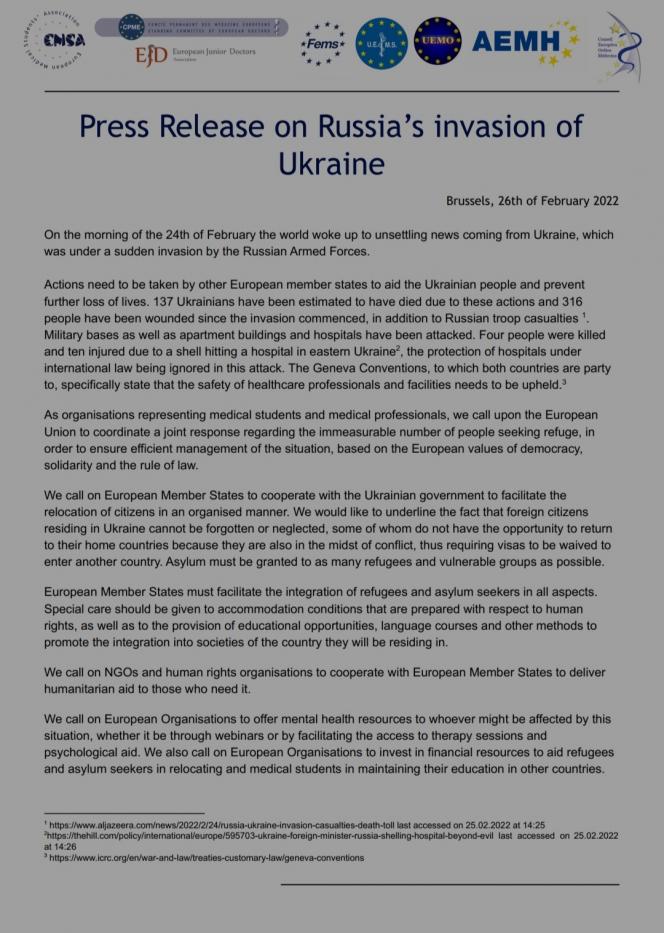 On the morning of the 24th of February the world woke up to unsettling news coming from Ukraine, which was under a sudden invasion by the Russian Armed Forces.

Actions need to be taken by other European member states to aid the Ukrainian people and prevent further loss of lives. 137 Ukrainians have been estimated to have died due to these actions and 316 people have been wounded since the invasion commenced, in addition to Russian troop casualties .

Military bases as well as apartment buildings and hospitals have been attacked. Four people were killed and ten injured due to a shell hitting a hospital in eastern Ukraine , the protection of hospitals under international law being ignored in this attack. The Geneva Conventions, to which both countries are party to, specifically state that the safety of healthcare professionals and facilities needs to be upheld.

As organisations representing medical students and medical professionals, we call upon the European Union to coordinate a joint response regarding the immeasurable number of people seeking refuge, in order to ensure efficient management of the situation, based on the European values of democracy, solidarity and the rule of law.

We call on European Member States to cooperate with the Ukrainian government to facilitate the relocation of citizens in an organised manner. We would like to underline the fact that foreign citizens residing in Ukraine cannot be forgotten or neglected, some of whom do not have the opportunity to return to their home countries because they are also in the midst of conflict, thus requiring visas to be waived to enter another country. Asylum must be granted to as many refugees and vulnerable groups as possible.

European Member States must facilitate the integration of refugees and asylum seekers in all aspects.

Special care should be given to accommodation conditions that are prepared with respect to human rights, as well as to the provision of educational opportunities, language courses and other methods to promote the integration into societies of the country they will be residing in.

We call on NGOs and human rights organisations to cooperate with European Member States to deliver humanitarian aid to those who need it.

We call on European Organisations to offer mental health resources to whoever might be affected by this situation, whether it be through webinars or by facilitating the access to therapy sessions and psychological aid. We also call on European Organisations to invest in financial resources to aid refugees and asylum seekers in relocating and medical students in maintaining their education in other countries.

All governments should work together to ensure safe travel routes for people leaving the countries. The European Union and national border authorities, along with other relevant agencies, must handle any influx of refugees with the utmost respect for international law, human life and dignity. National governments and relevant organisations must ensure the provision of translators at borders and points of interface. Resources must be distributed equitably, allowing for countries to receive adequate support ensuring effective handling of the situation on all fronts. We call upon countries in stronger economic positions to provide assistance in the form of resources to countries unable to adequately support an expected increase in capacity due to this humanitarian crisis.

Additionally, a collaborative, cross-sectoral and cross-border effort is essential to uphold medical treatment of acute and chronic diseases during this time.

We call on our members and fellow healthcare students and professionals to lead by example through avoviding aid and assistance, while calling on national and international authorities to take appropriate action, in line with humanitarian law and human decency.

75 Years have passed since peace treaties after the Second World War were signed in Paris. What we are experiencing right now is a threat to freedom and to the values that we hold so dearly. Humanitarian crises should concern every individual and government around the world. Many events are unfortunately following shortly one after another around the globe, including wars and environmental catastrophes and every event that accounts for the unjust loss of human lives must be addressed equally.

As residents and citizens of Europe, we cannot understate our grief and disappointment regarding the emerging situation and at the thought of the burden it will bring on human and environmental wellbeing.

We are sad to see this regression to a time of bitter division instead of solidarity, and reiterate our call for the cessation of hostilities on our continent and the planet.

As health professionals of tomorrow, we believe that life and dignity always have to be protected and their value preserved, no matter what the surrounding political circumstances are. We recognise the importance of alleviating not only human pain and disease, but also the determinants that cause them.