Adopted on November 12, 2022 at the Autumn Meeting- General Assembly in Oslo, Norway. 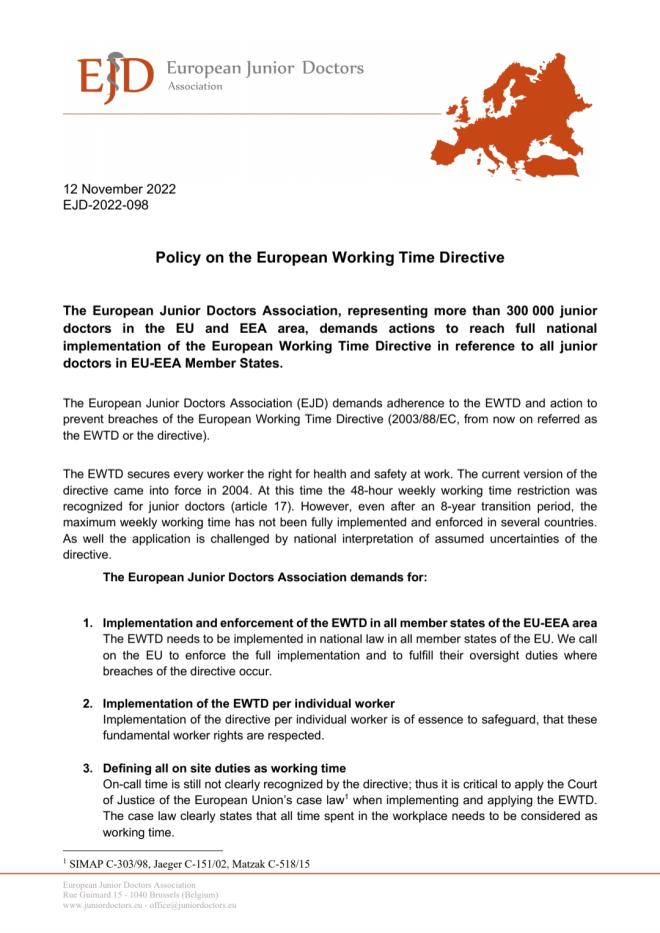 The European Junior Doctors Association, representing more than 300 000 junior  doctors in the EU and EEA area, demands actions to reach full national implementation of the European Working Time Directive in reference to all junior doctors in EU-EEA Member States.

The European Junior Doctors Association (EJD) demands adherence to the EWTD and action to prevent breaches of the European Working Time Directive (2003/88/EC, from now on referred as the EWTD or the directive).

The EWTD secures every worker the right for health and safety at work. The current version of the directive came into force in 2004. At this time the 48-hour weekly working time restriction was recognized for junior doctors (article 17). However, even after an 8-year transition period, the maximum weekly working time has not been fully implemented and enforced in several countries. As well the application is challenged by national interpretation of assumed uncertainties of the directive.

3. Defining all on site duties as working timeOn-call time is still not clearly recognized by the directive; thus it is critical to apply the Court of Justice of the European Union’s case law 1 when implementing and applying the EWTD. The case law clearly states that all time spent in the workplace needs to be considered as working time.

4. Exclusion the opt-out clause. National exclusion of the opt-out clause is fundamental in order to secure these rights for all workers. EJD encourages Member States to look at the examples of the numerous countries which have already taken action to make this option inaccessible.

EJD sees no cause to amend the directive, but The EU needs to take responsibility and enforce the transposition in all EU Member States.

EJD feels a responsibility in pointing out that many national healthcare systems falsely rely on junior doctors and resident physicians working overtime; therefore, implementation of the EWTD needs to be considered when assessing the need of future medical workforce.